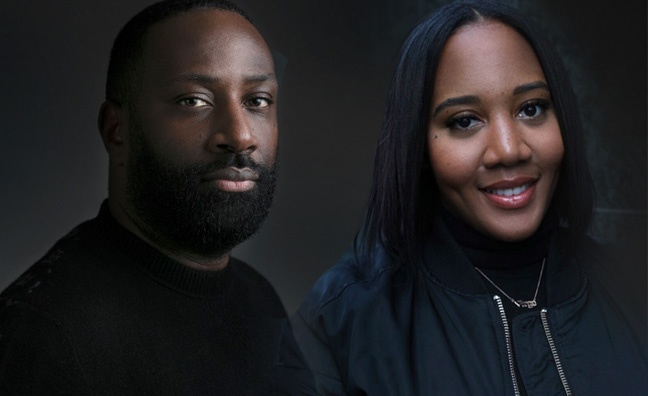 Shauni Caballero, founder of The Go 2 Agency, has partnered with Since ’93 co-president Riki Bleau to launch G293 Publishing, Music Week can reveal.

Caballero, who recently appeared at the Music Week Tech Summit, was approached by a number of companies. Ultimately, she chose Bleau as her business partner for the new venture. As part of Stellar Songs, he has worked with artist-writers including Sam Smith, Emeli Sande, Labrinth.

The Go 2 Agency, Caballero’s rights management and royalty administration firm, has worked with the likes of Central Cee and DigDat early in their careers. The company will continue alongside the new publishing JV.

Why did you decide to team up?

Riki Bleau: “I met Shauni by chance at a showcase, and as I got to know her I became more and more impressed with her passion for songwriters and publishing. I admired the independent business she has built by herself. Shauni comes from a similar community, which is under-represented in our industry, and as such I felt compelled to work with her and help her grow her business. Shauni is a boss; she didn’t want a job, she wanted a partnership. I admired and embraced that as I saw in her what I think Tim [Blacksmith] and Danny [D at Stellar Songs] saw in me all those years back which led to an amazing run with new talent like Labrinth, Emeli Sande, Sam Smith (with Naughty Words). They took a chance and partnered with me, and I want to do the same whilst improving on the things that could have been done better.”

Shauni Caballero: “Around the time I met Riki, things were really starting to take off for me. It was just me and Joao Assuncao, my assistant at the time [now MD]. There were other companies that had approached me with similar deals, but I knew what I really needed was a business partner, someone with a lot of experience who I could learn from and could help nurture my talent as a publisher and help grow my company. Riki has had phenomenal success in the publishing world, and I respected him so much, he was just what I was looking for. After working with Riki and his team, seeing how hard they all work, how much they care about the talent and how great they work together, I knew it was a team I would feel privileged to be a part of. Another major factor was that we share a lot of the same values. We both care deeply about our community and work hard to inspire the next generation of Black music executives.”

Shauni, tell us a bit more about your first meeting with Riki...

SC: “When I first met Riki and told him I worked in music publishing and about all the writers I was working with, he asked me three times if it was my own company. That was quite funny. I knew all about his management and career in records, but I had no idea about all his success in publishing with Sam Smith, Emeli Sande, Labrinth and so many more. I remember not being able to sleep that night because I was so inspired by his story. I think I pretty much knew then and there that I wanted to work with him. I was really surprised, but impressed, at how grounded and relatable he was. We have a lot of similar traits, he's very ambitious, hard working and driven. It's rare that you meet someone so successful in the music business without a big ego - he only cares about and focuses on the work.”

I'm very passionate about educating the music community on publishing

What do you think you each bring to the JV?

RB: “Shauni was courted by many companies and I fully expect her tenacious, committed and hard-working approach to be of great value to this venture going forward. I am happy she chose to grow her business with us. I will bring my experience, relationships, know-how and a fresh set of eyes and ears.”

SC: “I'm known for working with talent early a lot of the time - often the first time they hear about publishing is from me. Central Cee and DigDat are examples of writers that I worked with that have gone on to become stars. There's so much amazing talent that I'm constantly putting forward in our meetings. For the most part, no one has heard of them. I'm great at finding grassroots talent and taking them to the next level, however Riki can take them to the next stratosphere. I'm very passionate about educating the music community on publishing and it's still something I will do.”

What’s the deal with the joint venture?

RB: “It will sit alongside my existing Since ’93 publishing venture, home to recent Grammy-winning writer IO (Burna Boy, J Hus, Dave, Skepta), 4Play Jordz (NSG/Hus/Young T & Bugsey) and singer-songwriter Robin Knightz (signed to 5k/Sony Music). We are approaching the end of the term of our existing partnership, so watch this space for exciting developments as we move forward.”

Can you tell us about any signings? What kind of roster do you want to build?

RB: “We have our eyes on some targets and you will be the first to know once we make signings. But you can be sure by my reach and record that it will be all about the songs and songwriters first, identifying and developing exciting new talent.”

How is the publishing sector doing on diversity for both executives and talent - and how can G293 help drive progress?

RB: “I’ve been fortunate enough to attend publishing awards from The Ivors, to BMIs or ASCAP Awards for many years now and can attest to the lack of Black people, traditionally not many young people either and even less so young Black women. Shauni represents change and we want to play our part in pushing the culture forward and change the experience for aspiring young Black publishing executives, songwriters and those within the publishing community.”

SC: “We all know diversity across the entire music industry needs to be improved, both Riki and I are both advocates for diversity, particularly within the publishing industry. I do hope the work we are doing inspires more people of colour to explore the world of music publishing. It's the backbone of the music industry; it's where it all starts and where it ends.”

What do you hope to achieve with the JV in the first few years? How do you want to do things differently to other publishers?

RB: “The most important thing is to discover and nurture talent. Alongside that, as a Black man and senior executive in this business, I feel it’s our responsibility to make the path easier for those who come after us, helping to improve the environment and experience for both songwriters and future executives of colour to feel comfortable, to be themselves whilst being a part of the publishing community.”

SC: “Exactly that, we both share the same view that we sign based on talent, not data and metrics.”