Can LadBaby claim the Christmas No.1 for the second year running? 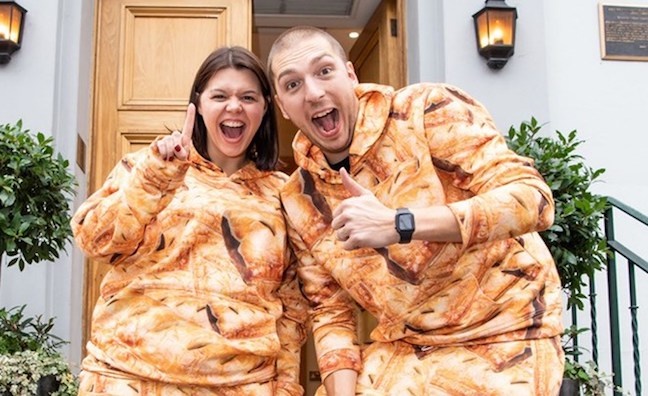 LadBaby is still the frontrunner for this year’s Christmas No.1 with I Love Sausage Rolls, according to the latest sales data from the Official Charts Company.

The YouTuber’s reworking of Joan Jett’s I Love Rock & Roll is raising money for The Trussell Trust, which provides emergency food and support to people in poverty. It’s one of several charity campaign Christmas singles to go big in recent years.

I Love Sausage Rolls (Frtyfve/AWAL) is on 66,569 sales (Official Charts Company). The nearest challengers are Own It (Atlantic/Merky) by Stormzy with Ed Sheeran and Burna Boy (40,203 sales) and Last Christmas by Wham! (27,370 sales).

“If it ends up being No.1, we're going to be talking about LadBaby in the same breath as The Beatles and the Spice Girls,” said Martin Talbot, chief executive of the Official Charts Company. “They will be the only three acts that have had No.1s at Christmas in two [or more] successive years – that's just nuts.”

LadBaby was No.1 last Christmas with We Built This City, which has sales of 129,025.

Unusually, the vast majority of LadBaby’s total is made up of downloads, which is has helped its cause.

“Compared to some of the other campaign records we've seen over the last five years, LadBaby has learnt that telling your supporters to stream a record on repeat – which, of course, we don't encourage – actually doesn't have the impact,” said Talbot. “If you buy one download, that's the equivalent of 100 streams on a premium service, so it's always going to be more productive and more effective to download a track, and encourage your supporters to buy a record rather than just stream it.”

Streams are generally dominant in the singles chart and increasingly important on the albums rundown. But Rod Stewart’s You’re In My Heart is a physical-focused album on course for a Christmas No.1, while LadBaby’s streams are less than 10% of its total.

“It shows you that the Christmas market is so different,” said Talbot. “It’s for a great cause and [I Love Sausage Rolls] has got a good lead, though nothing is out of the question [at this stage].”

The impact of streaming has pushed classic festive songs up the charts again this year. But a catalogue track has still never claimed the Christmas No.1 in the streaming era, in large part because ACR chart rules make it harder for songs that have not been newly released and marketed.

However, Wham!’s Last Christmas is a strong contender, thanks in part to 4,202 physical sales so far this week. The white vinyl replica was released to mark the single’s 35th anniversary.

In the US, Mariah Carey’s All I Want For Christmas Is You has finally reached No.1 after 25 years. In the UK chart, Carey’s evergreen song is currently at No.7, according to the Midweek sales flash.

“Mariah will still have a shout in future years, there’s still a possibility that she will do it,” said Talbot.

He said that the surprise return of LadBaby is a sign that the Christmas chart race has become more competitive.

“The thing about the Christmas No.1 race is that it changes over the years, and it will continue to do so,” he said. “Just when everybody writes it off for being less interesting than it used to be, then something like this comes up. It's supported by a national newspaper and tens of thousands of people are buying it.”

He added: “It's always been exciting for us over the last 10 years. But there was a point with The X Factor records where people were asking who’s going to get anywhere close. It’s now become a bit more of an open race.”

We’ll know the final result for the Christmas No.1 single after 5pm on Friday (December 18).

If LadBaby does manage to reach the summit, it seems likely that there will be an attempt to do the triple with another song about savoury snacks in 2020. But spare a thought for the OCC, as Christmas falls on a Friday next year.