'He has a lot to say': Hats off to Dave as the biz celebrates Mercury win 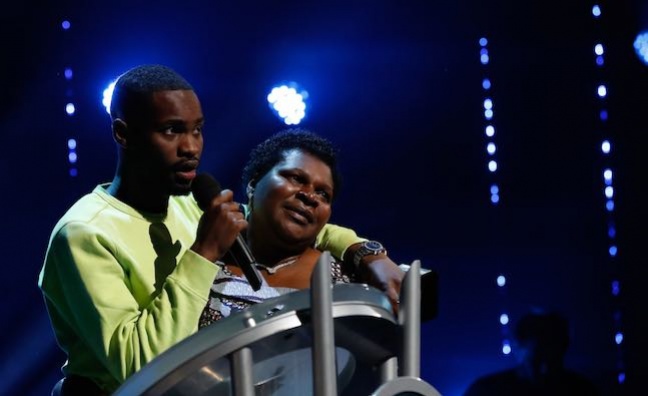 Dave’s co-manager Benny Scarrs has told Music Week that the Hyundai Mercury Prize-winning rapper “pours his heart into everything he does”.

Scarrs was engulfed in celebrations in the wake of the South London MC’s win at last night’s ceremony at the Eventim Apollo in West London. As a throng of industry figures and artists including Universal Music chairman and CEO David Joseph, Stormzy and Jorja Smith surrounded Dave’s table, Scarrs reflected on what the Prize means for Dave.

"It’s incredibly overwhelming. Jack [Foster, co-manager] and I met Dave when he was 17 years old, we’ve watched him pour his heart into everything he’s done musically and I’m so happy it’s culminated in this,” he said.

“It’s a real honour, this Prize is incredible. The other artist he was up against were phenomenal, it just means the world.”

It's a real honour

The Neighbourhood co-founders won the Manager Of The Year trophy at the Music Week Awards 2019 in the wake of Psychodrama debuting at No.1 in the albums chart in March. It has 131,499 sales to date, and stands to benefit from a post-Mercury boost.

BBC Radio 1’s Clara Amfo, one of 12 judges on this year’s panel, was close at hand too.

“The reason we came to a unanimous decision about Dave’s record is that, regardless of genre, it’s just a good record,” the DJ told Music Week.

"I don’t want people to say, ‘This is so great for a hip-hop record’. It’s a very human record, very vulnerable and raw,” Amfo added. “It’s not tokenistic, it’s not like, ‘Oh look a rapper’s explaining his feelings, let’s give him a biscuit,’ it’s fantastic storytelling, that’s what sealed it.”

Dave’s one of the most brilliant songwriters of his generation

“I’m delighted for him, the record tells a story,” he said. “It was a very tough decision for the judges but he’s a very worthy winner, an incredibly talented young man. He has a lot to say and people want to listen. He’s making waves and you could tell from the reaction in the room how people feel about it. It’s great for the Mercury Prize.

Mike Smith is MD at Warner Chappell, and publishes Dave.

“Dave’s one of the most brilliant songwriters of his generation,” he said. “It’s a joy to see his music receive critical acclaim as well as commercial success. He’s just 21 and has already won the Mercury, bagged an Ivor and celebrated a No.1 album and single. That’s not bad going!  He’s one of the most grounded guys in the business, so he’ll take the latest recognition in his stride and be straight back to work on more incredible music.”

Click here for an interview with Scarrs about the success of Funky Friday and click here to read producer Fraser T Smith on the day Psychodrama went to No.1.