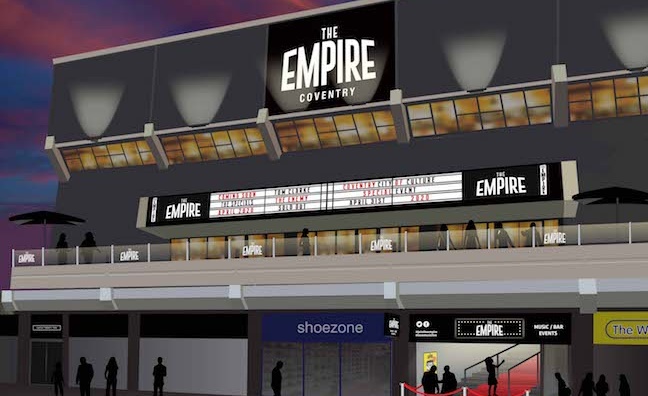 The Empire, Coventry, has announced ambitious plans to relocate its club and live music operations to the city centre.

The venue, currently based in Far Gosford Street, will re-locate to Hertford Street on the site of a former cinema and corn exchange - potentially doubling its audience capacity to 1,800.

Coventry is the UK's CIty Of Culture 2021 and the new site is due to officially open in August, subject to the Covid-19 pandemic=.

Empire manager Phil Rooney said: “Our lease on the Gosford Street building was coming to an end but we were desperate to keep live music in Coventry and build on all the hard work we’ve put in since 2015. I had some memories of the cinema in Hertford Street and when my son told me that the sports shop had closed I immediately began talking to Coventry City Council about the potential for the site.

“With the support of the Council and City of Culture 2021, we have built a significant investment that will bring jobs to the city and create a first-class entertainment venue to rival anything in the UK.”

Martin Sutherland, chief executive of Coventry City of Culture Trust, said: "We're delighted to see The Empire move to new, bigger, premises in advance of a very busy 2021 when we seek to throw a spotlight on Coventry's live music scene.

"Our investment in organisation and audience development activities will help this iconic Coventry venue reach increased audiences from across the city and help it make the most of Coventry's year in the spotlight."

The renovation will allow for events with capacities from 300 to 1,400, initially.

Rooney added: “We have always believed Coventry deserves a music venue to rival other big cities, that is why Empire was born. Yes, we are in strange and unprecedented times right now, but I believe this fantastic new bigger space will, in the future, help attract more great bands to our city, and will allow us to open the diary to other types of entertainment and community events.”