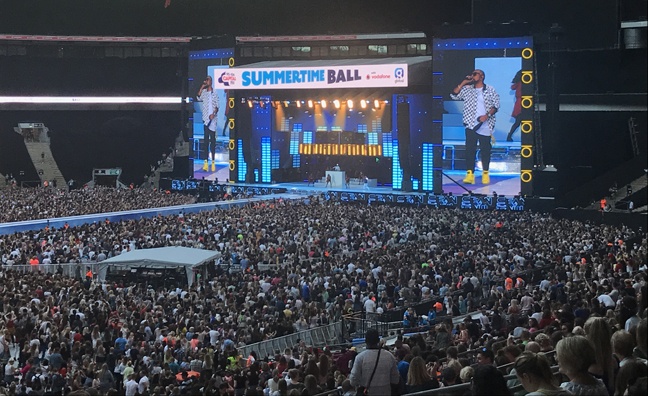 The Capital Summertime Ball with Vodafone showcased some of the hottest names in pop as it kicked off Wembley Stadium’s live music season on Saturday.

It was the fastest-selling Summertime Ball to date, with all 80,000 tickets snapped up within 90 minutes of going on-sale, according to organisers. Here, Music Week looks back at some of the highlights.

It’s not often a headline artist opens the show, not that anyone was complaining as Bruno Mars tore through a blinding set of wall-to-wall bangers. Indeed, it’s a credit to the rest of the bill that they weren’t overawed by the task of following the US star’s half-hour of pop perfection.

The quantity of UK breakthrough artists in 2017 remains to be seen, but there’s no doubting the quality. Stormzy and Rag’N’Bone Man both looked at ease on the biggest stage, adding significant credibility to the Ball’s proven chart formula.

While the aforementioned “serious” duo were each armed with just a microphone, it was the pop singers who brought musical instruments to the fray; Charlie Puth on piano and Shawn Mendes, James Arthur and Niall Horan on guitar, all demonstrating that there’s far more to their talents than may first meet the eye.

When did Sean Paul come back? When did he ever go away? No one seems quite sure, but the music world is an infinitely more fun place with him in it. His lively set rivalled Mendes’ and Little Mix' as the day’s most well received, while his featured role on Sia’s Cheap Thrills provided one of its biggest sing-alongs. Paul was also the event’s most prolific performer, appearing on no fewer than three separate occasions - also joining Clean Bandit and Anne-Marie to reprise their No.1 smash collaboration Rockabye and - latterly - Little Mix on Hair.

Speaking of which, the world’s biggest girl group were on sparkling form, closing the epic show with a seven-song set. It’s surely now just a matter of when, not if, they return to headline Wembley Stadium in their own right.

Seven hours seems a trifle long running-time for any music concert, let alone one largely aimed at youngsters (and not everyone lasted the duration, judging by the smattering of the empty seats for some of the latter performances). But that minor bugbear aside, Capital Summertime Ball was a slick, seamless production that put smiles on faces and sent the people home happy. Demand for December’s Jingle Bell Ball at The O2 is certain to be just as high.