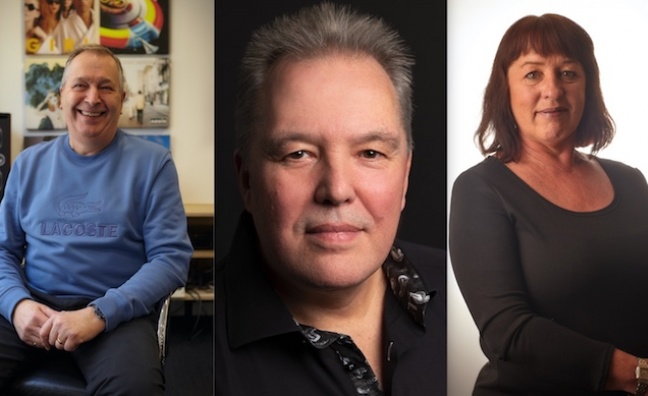 Sony/ATV UK has unveiled its new executive team following a series of appointments and promotions.

As revealed in the latest issue of Music Week, a new core leadership team has been established around UK co-MD/president David Ventura and co-MD Tim Major. The pair were promoted at the same time as EVP, COO, William Booth, last May.

The publisher has now elevated Peter Smith to SVP, financial investment & analysis, and Will Downs to SVP, finance to complete the key operational advisory team.

Ventura and Major have also promoted Alison Hook to a new VP position overseeing all sampling and copyright infringement matters for the company.  All three report to Ventura and Major.

Major said: “We are so fortunate to have such experienced, reliable and knowledgeable executives in our corner. Pete is at the heart of everything we do, working hand in hand with David and myself as well as the A&R, business affairs and finance teams on all frontline deals and acquisitions. Many know him as ‘Pipeline Pete’ but, now that we have moved to real time accounting, we are considering alternative titles.

“Will is an incredibly diligent and effective individual and one of the safest pair of hands in the business. He has a tight grasp on everything we do, gives hugely valuable counsel and takes care of business with a calm and reassuring demeanour. We are blessed to have him at Sony/ATV.”

Ventura added: “These internal promotions are thoroughly well deserved and reflect the incredible talent and forces we have here at Sony/ATV. Tim and I are very lucky to have had the full support of our UK team since we were promoted. Alison is a living legend and a true inspiration. Her relentless effort to protect the interests of songwriters has been her passion for the past 25 years. Her contribution to the musical community, industry and our company is simply invaluable, and we are delighted to announce her very well-deserved promotion.”

We are so fortunate to have such experienced, reliable and knowledgeable executives in our corner

The company’s UK A&R team has also been revamped, with a number of significant arrivals and promotions.

Ventura said: “Sarah is quite simply a force of nature. Her energy is inspirational, and she is someone that you want on your side. Sarah is a born leader, a true professional and I am incredibly excited to be working with her every day. She is on a mission and whilst only having been with us for a few months has already signed Aitch, Conducta and Young T & Bugsey.”

Sony/ATV has hired Rich Castillo as senior director, A&R, who arrives from Polydor, where he was senior A&R manager.

Ventura said: “Rich is the latest member to join the Sony/ATV family and his role will be key. As an incredibly experienced and trusted A&R. Coming from records his profile and culture will be a great strength, especially considering how the publishing business has evolved and becoming more and more central. His energy, personality and ‘savoir faire’ will keep our A&R team moving in the right direction.

He added: “It has been a real pleasure to see Alice grow as a publisher. She is one of the hardest workers I have ever known, her passion is contagious, and she always fully dedicates herself to songwriters; frankly she never stops. She has been instrumental in the signing of Romans, Ellie Goulding and Lola Young.”

Chimene Mantori, who previously worked at Island Records, Atlantic Records and Imagem, has been recruited as senior A&R manager.

“To be completely honest we tried to hire Chimene a few years ago before she moved to Los Angeles,” said Ventura. “As soon as I heard she was returning to the UK, I called her immediately to explain that my offer to join us was still valid. Chimene is experienced, super connected with great taste, we are excited to have her on our team. She has been key in the signing of Aaron Smith to the Sony/ATV family.”

“Daniel is hungry and passionate, with a very impressive pair of ears,” said Ventura. “I am looking forward to seeing him develop in his publishing role with us and I am confident of the success that the future will bring.”

In other moves, Felix Canetty-Clarke is elevated to director, creative analysis and data, UK and international, while Sarah Gabrielli is promoted to UK & Europe A&R manager and Lily Beau Conway to junior A&R.

Major said: “Felix is a rare talent. He is driven, creative and mature beyond his years. His business acumen and analytical mind make him a genuine asset for this company and I fully expect him to continue to shine in this new role.”

Commenting on the promotions of Gabrielli and Lily Beau Conway, Ventura said: “Ever since her first day it has been clear that Sarah is a rising star who lives and breathes music. You can sense her passion simply by speaking to her for 30 seconds. Sarah’s intuition is spectacular, and she is dedicated to all of our writers around Europe. Last year she completed her first signings including Jordan Rakei, Dame X Dame (in partnership with Stellar Songs) and Loryn.

“Lily joined us as an A&R assistant and immediately everyone saw her unique sensitivity to songwriters. I am excited to see her career develop.”

The changes are complete with the return of James Dewar as an A&R consultant. He previously worked at Sony/ATV for 12 years.

“I am very pleased to welcome James back,” said Ventura. “His experience, expertise, network and unique ability to communicate with songwriters and artists will be embraced by the team.”

I am buzzing that the team consists of diverse personalities, backgrounds, ages, musical tastes and even nationalities

On the overall changes to the department, Ventura said: “The A&R department has been fully restructured and frankly I am buzzing that the team consists of diverse personalities, backgrounds, ages, musical tastes and even nationalities. Culture is key in our soul and we are all driven by the desire to deliver a best in class service for our song writers.”

Major added: “There’s so much energy and creativity in the air whenever I walk into the office and a real sense of purpose and commitment to our songwriters. I can’t wait to see what we can all achieve together.”

To read the full interview with David Ventura and Tim Major, pick up the latest issue – or subscribers can click here.