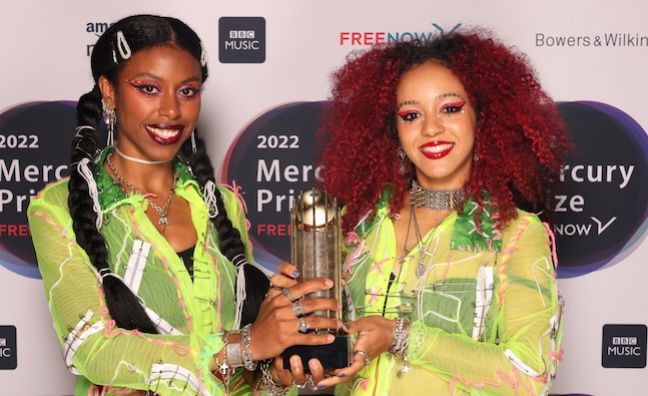 The full list is here including album sales figures up to the week before the shortlist.

The shortlisted artists each receive a trophy. The ultimate winner will be crowned at the ceremony, which takes place on Thursday, September 8 at Hammersmith Apollo and will feature many of the shortlisted acts.

This year marks the 30th anniversary of the Mercury Prize. Here, BPI, BRITs and Mercury Prize chief executive Geoff Taylor explains why the award is still a vital platform for artists…

After three decades of the Mercury Prize, what does it mean in 2022, especially as music and the way we consume it has changed so much?

“My view is that the heart of the prize is its meaning to the artists. When you see the reaction of artists who are nominated as one of the albums of the year by a really respected panel of music experts, that means a lot to them. We've always looked at the prize as like the Booker Prize or Turner Prize for music. When I look at this list, there is some truly exceptional music. Sam Fender is a very authentic and interesting artist speaking from the heart. The quintessence of the prize is that you see Fergus McCreadie alongside Harry Styles. They couldn't be more different, and yet they’re united by brilliant music. It levels the playing field in that way. It's really culturally important.”

The ceremony took place last year amid all the Covid uncertainty. You must be glad to return to normal for 2022?

“Obviously we've all had to adapt. This year, we hope to be back full throttle for the prize. It's an incredibly strong list this year, I cannot wait to be in that room watching the performances for that reason. So I think we'll have a sell-out event, I say that confidently but I think we’ve got a great line-up. And I think everybody's really excited to be back, listening to live music and having that feeling of this incredible buzz of positivity, and an artist community all supporting each other at the Mercurys. That's what I love about it.”

And there are some new partners for 2022…

“Amazon are our digital partners, we’ve got Bowers & Wilkins returning as audio partners, and Free Now [taxi app] as a new headline partner, which we’re thrilled about. For them, it's all about giving meaning to the service they provide. They want to be a service that music fans use to get home from gigs safely. I love the fact that they see music as an essential touch point for a brand. They see the Mercury Prize as really central to the world of British music.”

Does Amazon bring a good reach for the shortlisted acts among music fans?

“Amazon Music is fantastic, it’s helped bring in a new group of music consumers who weren’t the early adopters of Spotify or Apple Music, and perhaps sometimes not as deeply engaged in new music. That's precisely why, I think, Amazon wants to have the Mercury Prize in their portfolio as something which reaches hardcore music fans amongst their base, but which can also introduce more passive music fans to new music and get them using the service to discover. The Mercury Prize is all about discovery, and therefore hopefully it's very attractive to digital music services. That will be a great partnership, we've always loved working with the Amazon team.”

What does Harry Styles - with the biggest album of the year so far - bring to the Mercury Prize?

“The first thing I want to say is, I want to congratulate all of the artists for their album being chosen on the albums of the year. It's important to say that, because people talk about nominations. Actually, these are not nominations, these are the 12 albums of the year. They're all winners and they get a winner's trophy, that's really important.

“To answer your specific question, I think it's really helpful to have an artist of the popular appeal of a Harry Styles alongside some of the artists who are less well known. Because the Mercury Prize is all about quality, if you write a fantastic top-notch pop album you're just as entitled to be one of the albums of the year as somebody making grime or jazz. So, firstly, in terms of having a list which is based on quality, it shouldn't discriminate by genre. I'm pleased to see Harry Styles on it for that reason, because it’s a fantastic pop record. But I also think it helps to broaden the audience with the Mercury Prize. For artists like Fergus McCreadie or Kojey Radical, who haven't necessarily got a huge mainstream audience yet, that mainstream audience will now start discovering their music. So it's good for the prize and good for the artist.”

“Actually, Grey Area [by Little Simz] Could have won three years ago, it's a fantastic record. So to have a second album of the year is a terrific achievement. I think she’ll be quite hotly-tipped again this year.”

Would you say that the prize’s focus is still very much on new music and innovation?

“With 240-odd entries, that’s a lot of music for the judges to listen to. When they are choosing albums of the year, they're looking for albums that strike new ground and are musically innovating. Artists need to keep on pushing forward… those that push forward into new territory are more likely, I suppose, to get a Mercury nod than an artist who perhaps sticks in the same area creatively.”

What do you think of the strength of female artists in the prize? Elton John in Music Week recently suggested women were making the best records…

“Over the last few years, the Mercury has absolutely shown that diversity and inclusion are key values for us as a prize. I think the judges want to make sure that they reflect the music scene in all its dimensions. Over the last few years we’ve had very strong representation for female artists - it's seven out of 12 this year - so that's important. In terms of ethnic diversity, if anything the prize has tended to have higher levels of representation. I think that speaks to the strength there’s been in British Black music, particularly grime and hip-hop over the last few years, and that has continued in 2022.

“Nova Twins is a really interesting record, I absolutely love that record. They're kind of breaking new ground, you know, with quite a heavy sound - it’s fantastic crossover music. And it was impossible to miss them at the launch, they are characters. The thing that strikes me about this list, more than anything else, is the attitude of the artists, I absolutely love it. I think so many of these records are funny, they make you think and laugh as well as entertain you musically. That’s absolutely the case with Wet Leg, Yard Act, Self Esteem, Nova Twins and Kojey Radical. There are really funny and stimulating records on the list, which is fantastic, alongside the more contemplative, BBC 6 Music fare that often makes the list. So it sends a really positive signal to people about the health of British music - there is so much innovation.”