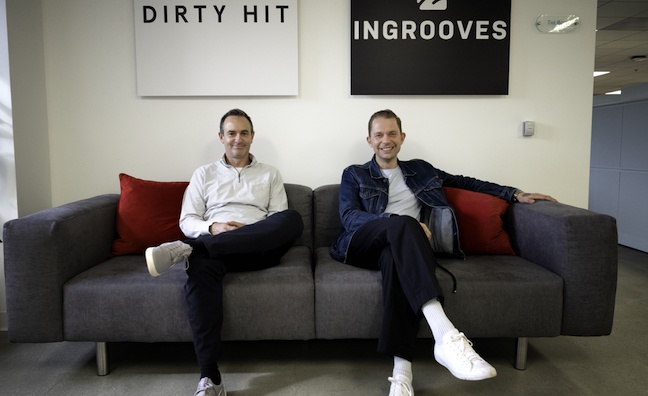 Dirty Hit has renewed its distribution partnership with Ingrooves.

The label behind The 1975, Wolf Alice, Pale Waves and Beabadoobee has signed an exclusive global digital distribution deal with Ingrooves.

The deal represents a deepening of Dirty Hit’s long relationship with Ingrooves and Universal Music Group and is set to expand the independent label’s presence around the world. Music Week has reported on the launch of Dirty Hit's US operation.

The 1975 will continue to be released in partnership with Polydor/Interscope and distributed by Universal.

“We have had a long working relationship with Ingrooves, stretching back nearly a decade,” said Jamie Oborne, founder and CEO of Dirty Hit Records. “Bob Roback and his team at Ingrooves have built one of the most sophisticated distribution operations in the world and I’m excited about this new era for our two companies.

“Similarly, our ties with Universal Music Group run deep, particularly with David Joseph [chairman and CEO UMG UK/Ireland] and John Janick [chairman of Interscope Geffen A&M] who were early supporters of our label and artists. I am excited to continue working the next The 1975 album with the Polydor and Interscope teams. UMG’s acquisition of Ingrooves is a perfect marriage of Dirty Hit’s two core partners and so this deal with Ingrooves, whose footprint is expanding, feels like a natural evolution as we continue to grow. I’d like to thank Sir Lucian Grainge and Boyd Muir for their continued belief in and support for Dirty Hit.”

Bob Roback, CEO of Ingrooves, said: “In Dirty Hit, Jamie has created an incredible launching pad for a new generation of artists. We have long been partners with Jamie on a variety of his releases and are thrilled to be expanding our partnership as he looks to grow Dirty Hit around the world.”