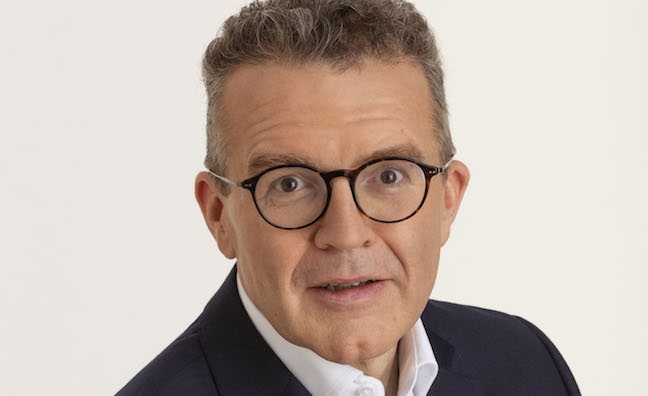 New UK Music chair Tom Watson is on the front cover of Music Week this week in an exclusive interview the entire music industry is talking about.

The former shadow culture secretary and deputy leader of the Labour Party took over from veteran publisher Andy Heath on April 1 and has been grappling with the devastating impact of the coronavirus on the industry ever since.

In the issue, Watson sets out his full agenda to deal with the crisis and also how to get the industry back to normal as swiftly as possible, once the lockdown is over.

“We’re putting in some frameworks for how we can get the sector up and running very quickly after the restrictions are lifted,” he said. “When can record shops open? Do you open small venues early, larger ones later? [We’re] making sure there are no surprises from government in any of those outcomes and making sure they’re hearing our voice.”

He also outlines his longer-term priorities for the music sector, including securing a proper post-Brexit plan for the industry from the government.

“We’ve got to make sure that bands can tour, which means getting touring visas right,” he said. “We’ve still got to make sure copyright protection is in place, even though we won’t be part of the European arrangements. Setting the post-Brexit trade arrangements is key. All the issues that were there two months ago are still there and we’ve not lost sight of that – and we haven’t got the clarity we need on some of those really important issues.”

As a former politician, Watson is ready to exert his connections and influence in the corridors of power to advance the case of the music industry. Yet, despite his appointment being roundly welcomed by senior figures in the worlds of politics and music, it has also faced some criticism from a group of veteran music industry figures, including former BPI deputy chairman Mike Batt.

In our cover story, Watson addresses his critics, and moves to calm any concerns that he doesn’t have the qualifications for the UK Music role.

“What I’d say to people is, UK Music is the body that talks to government,” he said. “And obviously I’ve been brought in because I’ve had very great experience in Parliament and they know I’ve got a skillset there. And I hope they know I was at a level in politics that means I can work with a team.

“The UK Music board is represented by some of the most experienced people in the music industry and the role of chair is very different to that of CEO. My role is to make sure the board sets a strategic direction for UK Music. So I’d guess the board wanted someone who’d got parliamentary experience and skills and they’ll balance the team in other areas.”

Watson was a passionate campaigner for Labour, but dismissed suggestions from his critics that that would mean he could not win support from the government and others across the political spectrum.

“It’s a different role, isn’t it?” he said. “And the one thing I’m very keen to remind people of is, I’m no longer a politician. I’m an ex-politician who knows about politics.

“Matt Hancock, who was one of my most formidable opponents when I shadowed him at DCMS, was very kind about my appointment and there’s been a number of Conservative MPs as well as Labour MPs who welcomed it.”

Some of Watson’s veteran industry detractors focus on his controversial role in Operation Midland’s investigation into a suspected paedophile ring involving senior establishment figures. Watson highlighted the claims of Carl Beech, later exposed as a liar and convicted of child sex offences and perverting the course of justice. Some claim that damaged Watson’s credibility and that the investigation contributed to a climate that saw high profile industry figures, while not linked to Operation Midland, also falsely accused of historical sex offences.

“I have apologised both publicly and privately to people on that,” he said. “I was challenged on this during the [UK Music job] interview as well and I’d say I hope I can convince people I was just trying to do my best and behave with honour and integrity. But obviously mistakes were made and I regret them greatly. I hope that won’t impact on my ability to do good for the sector and to contribute something back to an industry that I feel very strongly about and love very greatly.”

And he appealed for his critics to come and discuss their concerns with him directly.

“If anyone is worried about the role I’m playing or what I want to do, then come and see me and talk to me about it,” he said. “Let’s have a chat and hopefully I’ll be able to convince you that I can do a good job.

“I’d say, ‘Give me a bit of time and judge me on outcomes’. That’s all you can ask really. I don’t think I’ve ever met or had a conversation with Mike Batt, but I’d love to talk to him about it, if he wants me to convince him that my intentions are just to try and help the sector.

“I gave a lot of time and energy to the industry when I was a politician and aligned a lot of the policy of the party I was responsible for at the time to some of the asks that came from the sector, through UK Music. The talent pipeline, support for venues, the schemes that would have nourished those grassroots, came about because of the thinking in the industry and the people I spoke to when I went to events.”

“I know there are a lot of tensions across the estate of the music industry, but everyone I’ve met is fizzing with energy,” he added. “They’re very creative people who are out there in the hustle, trying to get their artists heard, trying to make new music, trying to get deals done. I enjoy their company and I want to try and do some good for them.”

* To read the full, exclusive interview with Tom Watson, see the new issue of Music Week, available now, or click here. To make sure you can access Music Week wherever you are, sign up to our digital issue by clicking here.