"It's provocative, it's funny, it's weird, it's surprising": Jared Leto on Thirty Seconds To Mars' innovative comeback campaign 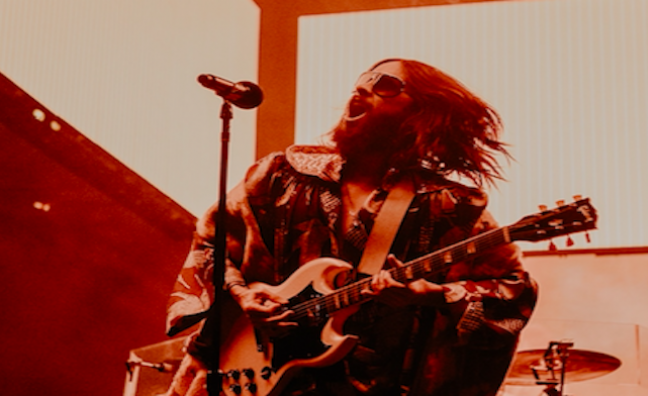 In the new issue of Music Week’s cover story, we catch up with Jared Leto to find out all about Thirty Seconds To Mars’ huge new album America. Plus, we hear from Full Stop Management’s Evan Winiker and Polydor’s co-president Tom March about how they’re rolling out a comeback campaign like no other.

The launch of Thirty Seconds To Mars’ fifth studio album – due April 6 via Interscope/Polydor – will not only see the band hitchhike across America (the Mars Across America event), it will also be accompanied later in the year with a Leto-directed documentary, A Day In The Life Of America. The idea of shooting footage across each of the American states on a single day to present a portrait of a nation – which is glimpsed in the below comeback video for Walk On Water – first came to when he saw a National Geographic book of photographers doing the same.

“I thought, ‘Wow, what an amazing film this would be and what a great companion piece to the album it would be,’” Leto told Music Week of the 24-hour endeavour that was pulled off on July 4, 2017.“We had camera crews in every single state in the country, all 50 states, plus Puerto Rico and DC. We really captured a portrait of our country that is pretty unique. We also had 10,000 submissions that people went out and filmed on their own, so we have thousands of hours of footage. We’re editing right now and hopefully it will be out in July.”

If you look at the covers as a whole, they really give you a context of the time you’re living in

Moreover, America is also being launched with not one, not two, not three, but 10 individual covers which have been conceived as a “time capsule” of contemporary American culture, each brandishing a cross-section of words such as ‘Donald’, ‘Apple’, ‘Fake News’, ‘FBI and ‘Walmart’. The covers have already appeared on LA’s Sunset Boulevard, NYC’s Times Square and outside London tube stations, and fans are also being encouraged to make their own cover using an official album cover generator.

“It’s really fun,” Leto told Music Week. “It’s different, it’s not just an album cover, it’s not just an image that represents an album, it’s a concept. I look at it like it’s an art show. It’s something that you could walk into a gallery and see hanging on the walls."

"I’m not saying it’s because I think it’s so great,” Leto continued. “I think it’s because it’s less in tune with tradition. It works in two ways, it uses advertising techniques, and also fine art techniques, to communicate a concept. It’s provocative, it’s funny, it’s weird. It’s surprising. To look at the lists individually, they can pique your curiosity, they can probably make you laugh, or confuse you, but if you look at them as a whole, they really give you a context of the time you’re living in.”

“When I met him and I saw how much he cared, how passionate he was, I was blown away by his ideas and enthusiasm,” March told Music Week. “Every single move Jared makes, he makes it count. He really thinks about the best way to get his message and music out to grab attention.”