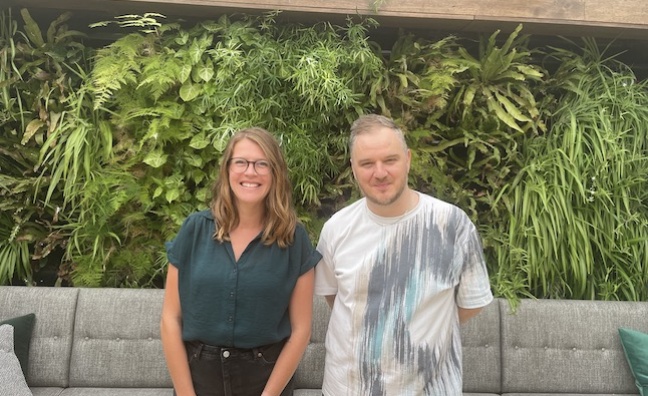 Based in Toronto, Mhairi Palmer has been announced as director of North American sales, joining from her previous role as head of Anthem Entertainment’s royalties and administration department.

She will report directly to Richard Leach, general manager of Curve Royalty Systems and will work closely with the company’s US client support team to accelerate the growth of Curve's brand and client base across North America.

Palmer started her career at Re:Sound in 2005 and has held a number of senior rights management roles in both recorded music and publishing companies including Sony Music Canada, True North Records and most recently Anthem Entertainment.

She said: “Having experienced first-hand the challenges faced by record labels and music publishers in this continually evolving industry, I could not be more honoured and excited to join this incredibly innovative, knowledgeable and nimble team at Curve Royalty Systems.”

Britt Timmerman (pictured, with Curve general manager Richard Leach), joins Curve Royalty Systems from her previous position at Kobalt and also reports to Richard Leach. Timmerman will be focused on growing Curve’s publishing client base and supporting them in their use of the platform.

Previously, Timmerman has worked for for Dutch collection society BUMA/STEMRA in their event licensing team. When a role for a Dutch speaking Copyright position came up at Kobalt Music Publishing, she left the Netherlands and moved to the UK, working in the companies copyright division across a broad spectrum of catalogue related royalties projects.

Britt Timmerman said: “I’m very excited to work at Curve in my new role as client & sales manager. After having previously worked at a society and publisher, I’m looking forward to learning more about yet another side of the music industry and working with this dedicated and passionate team. Curve is making royalty accounting easier and more transparent across the industry and I’m proud to be part of a company that is driving this much needed change.”

Curve Royalty Systems was launched in 2019 by former ADA/Warner, Cooking Vinyl and Essential Music executives, Richard Leach, Ray Bush and Tom Allen. Its royalty platform was built to deal with the scale and demands of music businesses in the digital age and now processes billions of lines of data for its clients, which include Domino, Mad Decent, Audiosalad, Cooking Vinyl, Epitaph Records, Dirty Hit and Altafonte among others.

Richard Leach, general manager of Curve Royalty Systems, said: “Mhairi and Britt bring experience, expertise and keen insight into how we can best serve our growing client base. They will significantly strengthen our core team and add real value to our global offering across the wider music industry.”