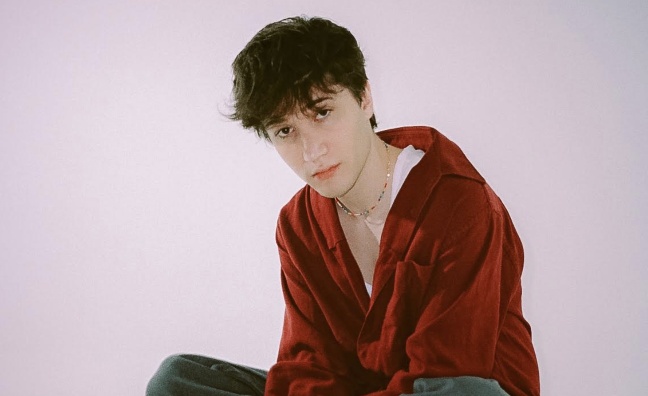 The bedroom tunesmith who got a record deal via a DM...

What does 2022 have in store for you?
“I’m currently working on my fourth EP. I started releasing music during the height of the Covid lockdowns last year, so I’ve just started being able to play live over the last few months, and it’s had a massive impact. The songs are a lot more band orientated, so it’s been cool to be able to add that new perspective into my writing. I hope to do a load more shows this year.”

You signed to Dirty Hit after DMing the label. How has the relationship evolved since?
“Before signing, I’d sent Jamie [Oborne, founder] an EP that I’d made at home. It was the first seven songs I’d made as I was trying to teach myself how to produce. This was the EP that we then planned to release onceI signed and I assumed we’d go to a ‘proper producer’ who could make it sound professional or something, but Jamie said, ‘What are you on about? It’s done, your production fits it perfectly, it just needs a mix’.

I have full freedom, I can just make whatever I want

"That was such a game-changer for me because I really admire Jamie, so for him to give my production his seal
of approval was a massive confidence booster, I just went home and started making music non-stop, trying so many new things, because I felt like a real artist and producer for the first time. Dirty Hit is my only experience, but after speaking to other artists on other labels, I feel I’ve been so lucky. I have full freedom, I can just make whatever I want.”

Talk us through your writing process...
“I write best by myself at home, starting on my guitar. Sometimes I find it so easy, I get on a roll and a load of ideas just flow, and other times I don’t write anything for ages. Usually something jolts me into action, recently it was The Beatles documentary Get Back and in the past it’s been a Cat Stevens song, or a Rex Orange County record. It can be anything, really.”

And what is your ultimate goal as an artist?
“I’d just like to be in a place where there’s enough people in each city around the world who want to hear my music live and I can do it forever...”