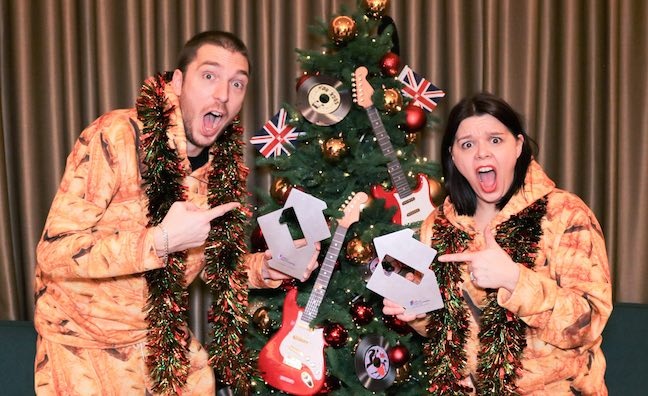 LadBaby’s I Love Sausage Rolls (Frtyfve/AWAL) has romped home in the race for the Christmas No.1 single. It’s a second consecutive festive chart-topper for the novelty act.

In the Christmas albums chart, Rod Stewart finished ahead of big new releases by Stormzy and Harry Styles (see below).

LadBaby’s reworking of Joan Jett’s I Love Rock & Roll finished the week with a huge tally of 92,896 sales, according to the Official Charts Company. Unusually, the vast majority of its total was made up of downloads (83,306 sales). It’s the fastest-selling download since June 2017’s Artists For Grenfell chart-topping charity single.

The YouTuber’s campaign, which will benefit The Trussell Trust to alleviate UK hunger and poverty, was well coordinated. The appeal for download sales rather than streams – remember, it’s 100 plays for a ‘sale’ on premium services – paid off in the battle for the Christmas No.1.

Own It (Merky/Atlantic), Stormzy’s collaboration with Ed Sheeran and Burna Boy, finished at No.2 (67,649 sales). With chart rules capping singles entries to three, the UK rapper also has debuts at No.6 (Audacity feat. Headie One) and No.9 (Lessons).

With Lewis Capaldi’s Before You Go (EMI) at No.3 and Dua Lipa’s Don’t Star Now (Warner Records) at No.4, Wham!’s Last Christmas (Sony CG) – at No.5 – is still chasing No.1 after 35 years. It was boosted by the Last Christmas film and an anniversary vinyl single (4,859 weekly sales); but the evergreen was always hampered by ACR rules for catalogue tiles that require double the number of streams to qualify for a ‘sale’.

“Congratulations to Ladbaby,” said Martin Talbot, chief executive, Official Charts Company. “It is a superb achievement to score an Official Christmas No. 1 once, let alone twice in successive years. And to do so with increased sales year-on-year is quite phenomenal – and all for a fantastic cause.

“Of course, commiserations to Stormzy, Lewis Capaldi, Dua Lipa and Wham! who made up the Official Top 5 in what has proven to be a genuinely competitive race, which has ended up spanning generations and genres.”

Mariah Carey’s All I Want For Christmas Is You (Columbia) finally made No.1 in the US after 25 years, but has to settle for No.8 here. Fairytale Of New York (Rhino) by The Pogues feat. Kirsty MacColl is at No.14, Merry Christmas Everyone (Epic) by Shakin’ Stevens is at No.16, Do They Know It’s Christmas? (Virgin EMI) by Band Aid is at No.17 and Step Into Christmas (Virgin EMI) by Elton John at No.19. Further festive favourites populate the Top 100.

There was also a crowd-sourced No.1 Christmas chart challenge for Jarvis Cocker and his politically charged tune Running The World (Rough Trade). In the event, strong download sales of 12,380 secured a No.48 entry – a moral victory, perhaps.

Following his sudden death, Juice Wrld re-enters with Lucid Dreams at No.27.

Last week’s No.1 Dance Monkey by Tones And I plunged to No.10 as a result of the impact of ACR.

I Love Sausage Rolls beat LadBaby’s 2018 festive No.1 sale of 75,442 for We Built This City. Back-to-back Christmas chart-toppers puts LadBaby in an exclusive club with The Beatles and the Spice Girls, although both those groups managed three consecutive festive No.1s. But LadBaby can claim to be the first act to deliver two novelty Christmas No.1s back to back.

LadBaby’s victory is likely to be short-lived, as last year’s No.1 fell to No.21 in the week after Christmas. That could open up the top spot for a challenge by Arizona Zervas’ hit Roxanne (Columbia), which is at No.7 with sales up 9% week-on-week. It would mirror the performance of Ava Max’s Sweet But Psycho (Atlantic), which finally made it to No.1 at the end of 2018 after the various festive songs fell away.

In the albums chart, there will be concerns at physical retail about the low sales in the week before Christmas. But Rod Stewart’s orchestral album with the RPO You’re In My Heart (Rhino) does the business with 71,330 sales (including just 710 sales-equivalent streams).

While Stewart sold more than the 68,606 weekly pre-Christmas total for No.1 album The Greatest Showman 12 months ago, it’s still a disappointing result for the Q4 peak period. Every other Christmas No.1 album of the past decade has topped 100,000 weekly sales.

Stewart now has 10 chart-topping LPs. The Beatles, Robbie Williams, The Rolling Stones and David Bowie are now the only acts with more No.1 albums.

Derek Allen, SVP, commercial, Warner Music, said: “We’re delighted that Rod has once again topped the charts and given Warner Music a Christmas No.1 album for a second consecutive year. Rod, working alongside the Royal Philharmonic Orchestra, has delivered a stunning record that’s breathed new life into his timeless classics. It’s great to see Rod’s popularity is as strong as ever as he’s fought off stiff competition for two weeks to claim back-to-back No.1s.

“In addition, we had a great first week with Stormzy’s incredible second album - Heavy Is The Head is a masterpiece that will go down as one of the great British records – and he’s also celebrating three tracks in the Top 10 singles chart too.”

Harry Styles’ Fine Line (Columbia) was No.1 in early sales flashes, but ended up at No.3 with 49,082 sales (including 15,115 streams). It’s down on the 57,000 week one total for his self-titled debut in May 2017. During his album launch show at Camden’s Electric Ballroom, Styles invited chart rival Stormzy on stage for a duet of Vossi Bop.

Here's the official shot of @Harry_Styles on stage with @stormzy at the Electric Ballroom (photo by Hélène Pambrun) for his Fine Line album launch: https://t.co/em7Fsub1X3 pic.twitter.com/e9kJkDYz5Q

With Lewis Capaldi’s Divinely Uninspired To A Hellish Extent (No.4, 32,780 sales) finishing ahead of No.6 Collaborations Project (Atlantic) by Ed Sheeran (No.10, 16,991), the Scot can surely look forward to claiming the biggest album of the year.

Previous Christmas No.1 album victors Michael Ball & Alfie Boe make the Top 5 with third collaboration Back Together (No.5, 32,491). Coldplay’s Everyday Life (Parlophone) is No.6 (31,902), followed by Robbie Williams’ The Christmas Present (Columbia) at No.7 (31,520) and Michael Buble at No.8 with Christmas (Warner Records). The Canadian’s 2012 festive LP is the gift that keeps giving – it sold 23,776 copies this week and is closing in on three million units.

The Who’s comeback album Who (Polydor) shifts a respectable 19,116 copies in its second week to make No.9.

The decline underlines the challenge for the compilation sector, which is down 34.4% year-on-year. On three occasions in the past decade, Now albums actually had higher sales than the No.1 artist album.