"This will surprise a lot of people!": Jared Leto on working with A$AP Rocky & Halsey on Thirty Seconds To Mars' new record 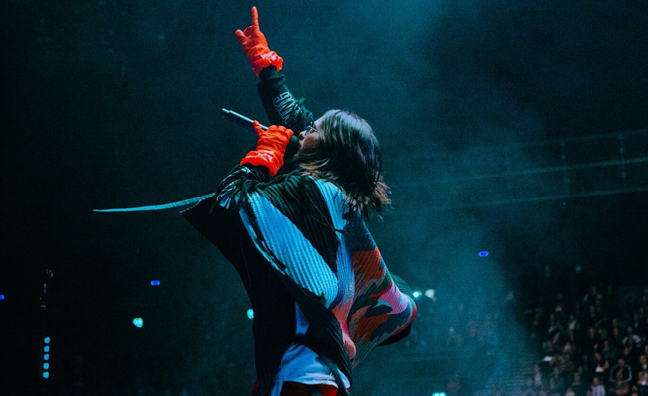 Thirty Seconds To Mars are currently riding high in the midweeks, with their fifth studio album America (11,948 sales) sitting at No.2 just behind comeback queen Kylie Minogue. The album, released via Interscope/Polydor, has already presented us with one of the most innovative marketing campaigns of recent memory as frontman Jared Leto, Full Stop Management’s Evan Winiker and Polydor’s co-president Tom March outlined in their recent Music Week cover feature.

That said, America is not without its fair share of surprises when it comes to the music. While Thirty Seconds To Mars first established themselves as a rock band, recent releases have seen their sound develop and broaden more and more. So much so, Leto told Music Week he sees the release as “just an album” – one not conforming to any particular genre.

“It’s funny, as kids my brother and I would listen to Zeppelin and The Who and, although they were rock bands, they were never afraid to experiment with strings, different types of music or different types of instruments,” Leto told Music Week. “We’ve always loved bands like Depeche Mode, U2 or The Cure where they had their own genre in a weird way. Bands yes, and making live music with real instruments, yes, but also using electronics and technology, and we’ve always been interested in that since the beginning. I think this album is very modern and will probably surprise a lot of people.”

Perhaps one of the biggest surprises this time around is the assorted guest appearances on the album, with One Track Mind featuring A$AP Rocky, Love Is Madness seeing them unite with Halsey and Dangerous Night including production from Ariana Grande hitmaker Zedd.

Speaking about One Track Mind, Leto explained that a combination of fandom and chemistry brought Thirty Seconds To Mars and A$AP Rocky together.

“I’ve always loved his work and he’s a phenomenal talent,” said Leto. “He’s got a great creative sense and he’s a really nice person as well, and that counts for a lot with my brother and I. He did an incredible job and he was a blast to work with, and a really positive dude. We’re really happy to have him be a part of this next chapter for us. People are really responding incredibly really well to the song, it’s a good feeling and it’s also our audience who is coming on this journey with us. It’s probably the only time we've had a guitar solo in a song in our life. It has this big ‘80s throwback, a Prince meets Slash guitar solo in the song.”

Leto also praised Halsey for her contribution to the song Love Is Madness.

“She’s a really unique artist,” Leto told Music Week. “She’s got a really powerful voice, figuratively and literally. She's someone I think really highly of. She was a pleasure to work with, and something happened on that track with her that I think is hard to describe. There’s some magic in there.”

The team behind Thirty Seconds To Mars stress that, while they are hopeful that these collaborations can help get their music across to different audiences, it was all an organic process.

A$AP Rocky was a blast to work with, and a really positive dude. We're really happy to have him be a part of this next chapter for us

“I think some people might discover them that might not have known them before,” said Evan Winiker, part of the Full Stop Management team alongside Irving Azoff and Jeffrey Azoff. “But it’s interesting because all those people were part of it a) because Jared’s friends with them and b) it served the songs best. He definitely wasn’t reaching for anything, trying to garner new fanbases. It’s cool because the songs came out so well. The tracks have a life of their own. Halsey did an amazing job, Zedd did an amazing job, ASAP Rocky’s work on One Track Mind is awesome.”

Winiker’s sentimets were echoed by Polydor’s co-president Tom March who told Music Week of his hopes for the project.

“Jared’s made a really modern, future sounding record that’s not confined to any one genre,” said March. “It’s a very modern-sounding record. He’s got a very, very modern campaign to go around it, that I think will get maximum attention.

“I know that for their fan base, I couldn’t think of anyone better for Thirty Seconds to Mars to collaborate with than an artist like Halsey,” continued March. “They have a load of fans that would be so excited to hear them both together on a record. I think with collaborations, they work when they feel really genuine. There’s nothing [on America] that feels forced [be it] working with Zedd, who’s one of the best electronic musicians in the world, or working ASAP Rocky, which was perfectly natural.”

You can watch the video for Thiry Seconds To Mars’ comeback single Walk On Water below: