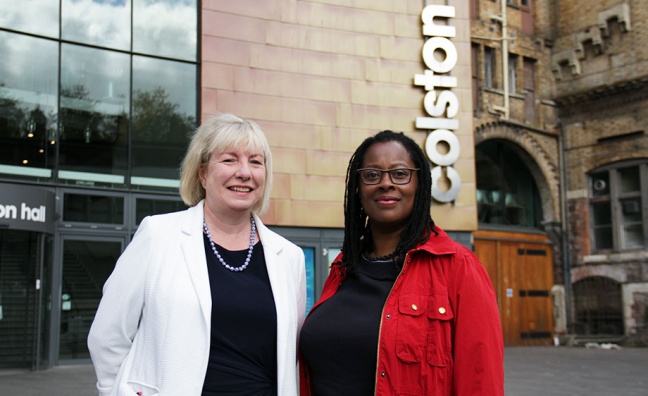 Bristol Colston Hall is to be renamed for its 2020 relaunch to remove its association with 17th century slave trader, Edward Colston.

The move was announced as operator Bristol Music Trust (BMT) revealed the next stages in its £48.8 million redevelopment programme for the venue, which celebrates its 150th anniversary in September.

“The name Colston does not reflect the Trust’s values as a progressive, forward-thinking and open arts organisation," said BMT chief executive Louise Mitchell (pictured, left). "We want to look to the future and ensure the whole city is proud of its transformed concert hall and so, when we reopen the new building in 2020, it will be with a new name."

BMT is keen to use the opportunity to begin a public conversation about a vision of Colston Hall that reflects the modern diversity and culture of the city.

Marti Burgess (pictured, right), one of BMT’s trustees, said: “We want to use this as an opportunity to open discussions with the Bristol public about how Colston Hall can reflect the diversity and inclusivity of our city. The Hall’s 150th anniversary this year is the perfect opportunity to begin these discussions.

“We will be appointing an artist to help us talk to local groups about Colston Hall’s role in the community and how we should recognise Colston’s name in the new building.

“We want to embrace our position at the centre of this naming discussion to work beyond the building and help lead conversations across Bristol about how we address and acknowledge the city’s connections to the slave trade.”

The Trust has raised just over £30m towards the Hall’s transformation since it launched it in September 2014, with funding pledges including £10m from Bristol City Council, £10m from Arts Council England, £5m from the Government, £4.75m from the Heritage Lottery Fund as well as private donations.

Upcoming concerts at the 2,000-capacity venue include The Kooks, Michael Kiwanuka, Imelda May, The Cranberries and Simple Minds.