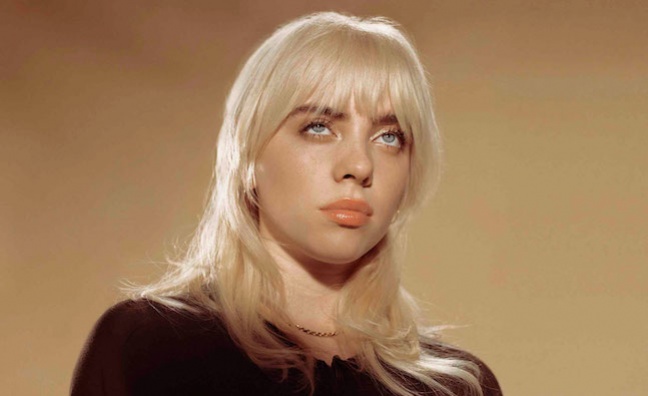 Billie Eilish is targeting a big No.1 album with Happier Than Ever (Polydor/Interscope).

The 19-year-old’s second long-player is already on 26,734 sales (including 20,095 physical copies) in the Midweek sales flash, according to the Official Charts Company. The title track is the highest new entry at No.12 on the singles chart, based on early streaming data.

UK retailers across bricks-and-mortar stores and DSPs have already spoken to Music Week about their hopes for the record. Billie Eilish’s 2019 debut, When We All Fall Asleep, Where Do We Go?, opened with 48,410 sales in April 2019. It has never left the Top 50 since, amassing 684,620 sales.

Last week UK rapper Dave scored the fastest-selling album of the year so far with We’re All Alone In This Together (Dave Neighbourhood/Universal), which racked up 74,191 sales - the biggest since Coldplay’s Everyday Life in November 2019. Eilish could surpass Olivia Rodrigo’s week one total for Sour (Polydor/Geffen) of 50,942, but it remains to be seen in the days ahead if she can catch Dave.

At the weekend, Billie Eilish spoke to Clara Amfo for a BBC One special, Billie Eilish: Up Close. She will also appear on the BBC Radio 1 Live Lounge on August 5 including the traditional cover version (performances of NDA and Getting Older are already available on BBC iPlayer).

Happier Than Ever was again co-written by Billie Eilish and her brother Finneas O’Connell, who is also the LP’s producer.

Here, her publisher Luke McGrellis, VP, A&R at Universal Music Publishing Group, opens up about the artistry and ambition of Billie Eilish...

How has Billie Eilish developed as a songwriter on this record?

“This whole record is growth personified. And I’m sure everyone hearing it will feel that. I’m not going to speak for her but, as a listener, I feel like she’s expressing and exploring even more of herself and her experiences. She is able to use words and ideas even more impactfully to give those things to us - which I think is what great songwriters do as they develop. They become both more skilled and instinctual at using words and ideas as their tools of expression.”

What are the ambitions for the songs on this album - what kind of global impact can they have for Billie Eilish?

“With artists like Billie, your ambitions have to be for the best, most relevant, and game changing opportunities out there. My hope is that wherever this record is heard, it helps cement her as the fearless, brilliant, singular artist and visionary that she is.”

How will UMPG be supporting this international album campaign? Are there opportunities to get involved with sync and other creative partnerships?

“Billie is a truly international artist and the UMPG global sync team has experienced incredible success with her previous songs around the world. For the new record, the team is already exploring many potential sync opportunities and creative partnerships.

“The [synchronisation] community loves Billie and always wants to find ways to partner with her, her huge fanbase and influence. Creative partners know that a partnership with Billie means added exposure and relevancy for their content, brand and consumer engagement. A Billie partnership is a win all around.”

Subscribers can click here for our preview of the album campaign with Polydor, UMPG, BBC Radio 1 and Deezer.