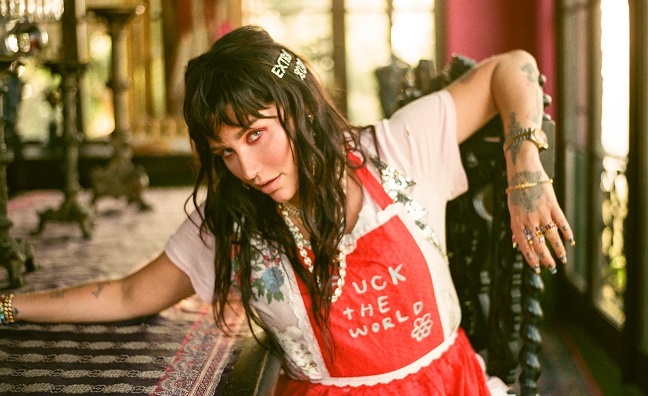 In our recent cover feature, Kesha – who has now shifted 14 million album equivalent sales globally – and her team took us inside the making of her highly-anticipated new album, High Road, which arrives on January 31 via Kemosabe/RCA.

In the feature Kesha dived deep into the making of the album, her place in pop, A&R, and the emotional journey she’s been on in recent years. At one point, she isolates the changes she would like to see in the music industry.

“If the head of a label is reading this, I would say: artists are human beings, we’re not robots," Kesha told Music Week. "I know I’m the luckiest person in the world for getting to achieve my dreams and my goals, but there are also sides of it that you don’t see coming, especially when you’re young – 15, 16, 17 years old – and you’re dreaming up this thing. It’s a really intense, insane ride. I’m so grateful, and I’m very lucky to have put out music and people listen to it. But [people should] just remember, we are human beings and we have emotion. I think a lot has changed, but there’s still a lot of changing to be done in terms of the industry.”

Here, in an unread extract from our interview, Vector Management’s Jack Rovner tells Music Week about what fans can expect from Kesha's album, and why the pair have endured together as artist and manager for over a decade and counting…

What does High Road say about Kesha and where she is right now?

“It continues her evolution as a songwriter, a singer, as somebody who is not afraid to go down different lanes in music. It's could be put under the umbrella of pop music, but it's got all these different influences, which was witnessed on [2017 album] Rainbow as well. So, this is a continuation of that, but much more in the pop arena. I just think it will just continue to open her up to many new people, and I think her fans will truly embrace this record. She's having a lot of fun.””

Kesha told us that for a long time she had to field criticisms about not being able to sing. Do you feel that she's got the respect she deserves now as a songwriter and as a vocalist from the industry?

“I do. Certainly on Rainbow, it was a true embracement of the album. Thus far, although High Road’s not out, we have put out three tracks, two videos and from talking to journalists, I feel people are loving it and they're writing about it, and her performances. So I think there’s a cheerleading squad out there for her, people love her and respect her as a human being, as an artist. And they know she’s real. The artists that endure are the ones that speak the truth. Their truth.”

You’ve worked with Kesha for almost 11 years. What was your first impression of her when you when you met her?

“A total free spirit. An incredible writer, performer. Just gifted. When she walked into the room that first time in Nashville, she lit it up.”

What is it about your personalities that work so well together?

“It's a huge responsibility to guide someone's career. Certainly, there are elements that go way beyond just guiding someone's career, but that is part of it. Our relationship has grown over the years, it’s become deeper – we have a deep respect for one another. I care about her as a human being, as an artist, as a cultural icon. But the most important is that she's just a lovely, lovely person. She’s got great energy and a great spirit about her. Certainly, We've had challenging, very, very challenging times, but we've also had the highest of highs.”

What have you learned about management from working with Kesha?

“That with true artists, as Kesha is, your job is to help them realise their dream. And it's certainly not about saying, ‘No, no, no’, it's about saying, ‘How do we achieve that? How can we do that?’ I think that that's where we've both grown immensely. I love to brainstorm with her and going after things that, between her creativity and hopefully my wherewithal, we can make happen. I love that combination. And that's only the grown over the years.”